The Merkel rhombus: How a hand gesture became a brand****** 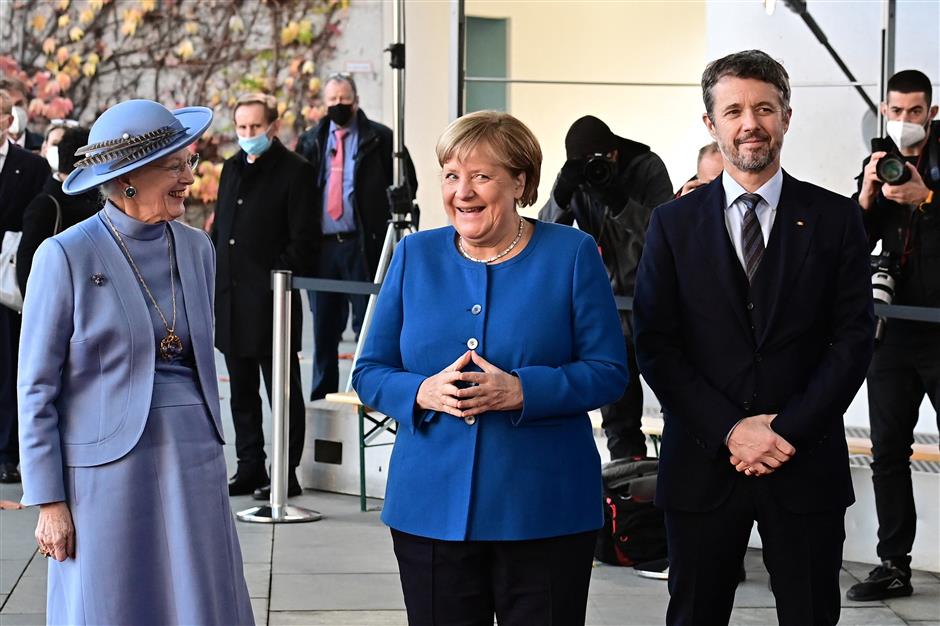 This file photo taken on November 10, 2021 shows German Chancellor Angela Merkel (center) forming her typical hand gesture, the so-called "Merkel-Raute" (known in English as Merkel Rhombus, Merkel Diamond or Triangle of Power), as she poses with Queen Margrethe II of Denmark (left) and her son, Crown Prince Frederik of Denmark during a reception at the Chancellery in Berlin.。

Hands resting in front of the stomach, thumbs and fingertips touching to form a diamond shape – Angela Merkel's "rhombus" hand gesture was her most recognizable trademark.。

The gesture has its own Wikipedia page, its own emoticon, "<>", and the longtime German leader has even been immortalized adopting the pose at London's famous Madame Tussauds waxworks museum.。

But the "Merkel-Raute," as it is known in German, became her signature largely by accident – born from a camera-shy Merkel being unsure how to pose during a photo shoot for Stern magazine in 2002.。

Then head of the Christian Democrats (CDU) but still three years away from being elected as chancellor for the first time, Merkel "didn't know what to do with her hands," photographer Claudia Kempf later recalled.。

"She let them hang down next to her, which made her look a bit exposed, or she joined them together. I said to her, 'You look too much like a pastor's daughter'," Kempf told the Rheinische Post newspaper in 2009.。

A few months before German elections in 2013, Merkel offered her own explanation of how the gesture had come about.。

"It's about the question of where to put your arms," said the trained physicist, adding that the rhombus also showed "a certain love of symmetry."

At the time of that interview, Merkel was campaigning for a third term in office.。 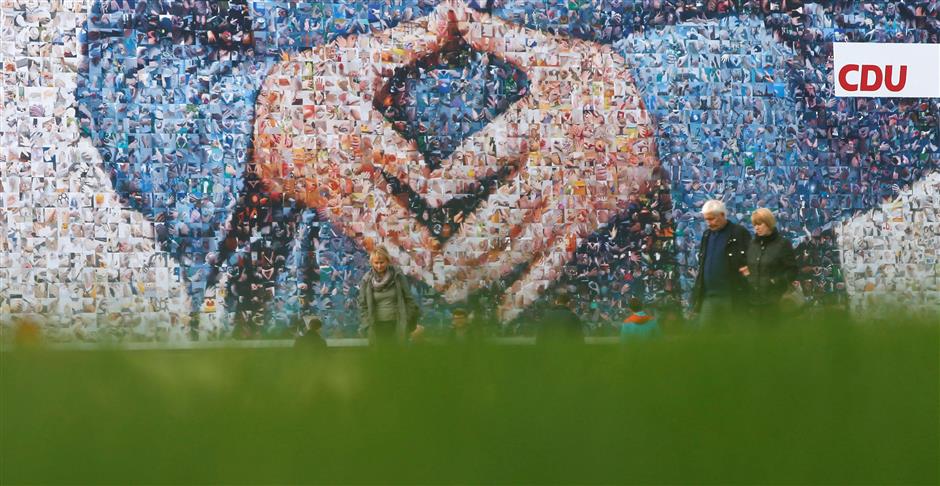 This file photo taken on September 22, 2013 shows people walking by a giant election billboard featuring German Chancellor Angela Merkel's famous diamond-shape hands gesture also known as Merkel rhombus that is displayed on the construction site of a hotel in Berlin.。

The whole parliament comes up for renewal in German federal elections, but her CDU party had decided on a very personalized campaign.。

A billboard 70 meters wide by 20 meters tall was erected near Berlin's central station featuring a giant image of the Merkel rhombus, made up of over 2,000 photographs of hands, with the slogan "Germany's future in good hands."

The rival Social Democrats (SPD) slammed what they called an "empty personality cult" around Merkel, while the Greens lamented: "If this is politics, we have fallen very low."

But the woman affectionately nicknamed "Mutti" (mummy) won the election by a wide margin a few weeks later, with the Merkel rhombus becoming "probably one of the most recognizable hand gestures in the world," according to Britain's Guardian newspaper.。

The gesture has also been likened to a bridge, a protective roof, and even a sign made between Illuminati members to identify themselves.。

"I believe the Merkel rhombus was initially adopted unconsciously," said Jochen Hoerisch, a communications specialist at the University of Mannheim.。

"But once it had been noticed by the public it was then consciously used by the chancellor as a brand." 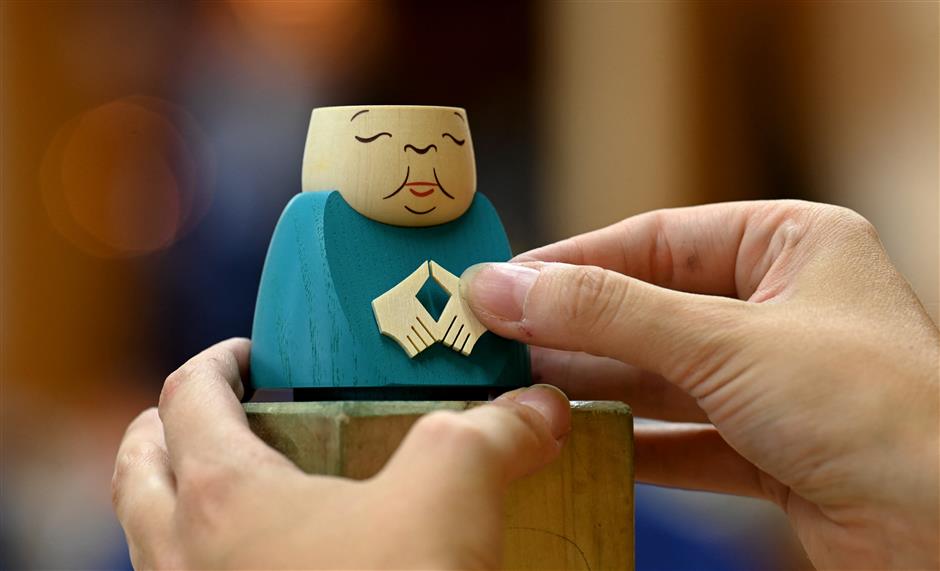 Even in the twilight of Merkel's political career, the gesture was once again catapulted into the spotlight during this year's election campaign when SPD chancellor candidate Olaf Scholz adopted it on a magazine cover.。

Scholz used the gesture in a photo shoot for the Sueddeutsche Zeitung – part of his strategy to position himself as the true Merkel continuity candidate, as opposed to Armin Laschet, the challenger from Merkel's party.。

This claim on Merkel's legacy prompted a backlash from the CDU and even from Merkel herself, who was at pains to point out that there were "enormous differences" between herself and Scholz.。

The 21-year-old Melnikova, competing in her fourth worlds, was second behind American Kyala di Cello after the vault competition, their first event. But she took the lead from the second event and never looked back, winning the first title of the tournament with a total of 56.632 points.

"I am very happy to win the title. I am the first Russian to win the world all-around title in 11 years, so this means a lot to me," said Melnikova, who was the bronze winner at the 2019 worlds.

Leanne Wong of the United States took the silver with 56.340 points and Di Cellos finished third with 54.566.

Melnikova was a member of the winning team of Russian Olympic Committee at the Tokyo Olympic Games. She also took two bronze medals from the all-around and floor events in Tokyo.

"After the Tokyo Olympic Games, I felt I still have strength left, so I decided to come to the World Championships," she said. "Maybe next year, I will take a break."

China's Wei Xiaoyuan, the National Games all-around champion in September, fell off the uneven bars and settled for the sixth.

The 17-year-old Wei said she was a little nervous at her first international competition, but that she has learned a lot from her rivals.

"I believe I can do better in the uneven bars final the day after tomorrow," Wei said.

The men's all-around final will be held on Friday. Enditem 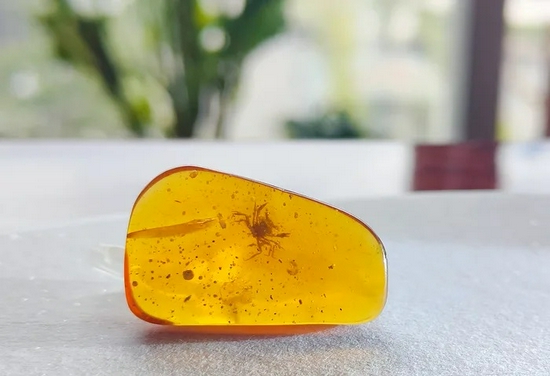 In 2015, two researchers stumbled across a piece of amber jewelry in a market in Tengchong, China, that was found by miners in Myanmar. The piece has a young, five-millimeter-long crab embedded in it.

That crab would be a major discovery in the study of crab evolution. A research team dedicated to the little crab released their findings Wednesday after years of studying the fossil. The newly discovered species is named Cretapsara athanata, "the immortal Cretaceous spirit of the clouds and waters," after spirits from South and Southeast Asian mythology. 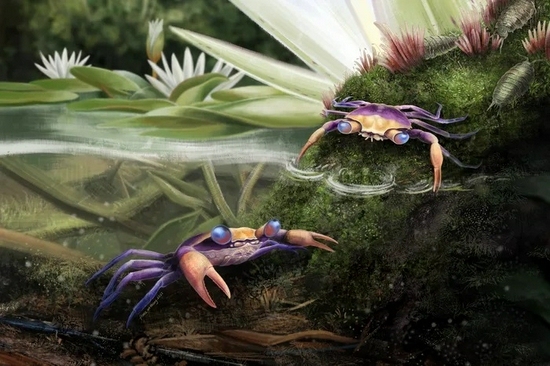 Before this discovery, scientists faced a conundrum: the known fossil record, consisting of just a few claws and carapaces, showed that crabs that lived on land and in fresh water split from their marine relatives between 50 to 75 million years ago. But the molecular record, which compares differences in DNA and RNA, said that the crab families split more than 125 million years ago.

That's why scientist Javier Luque, a Research Associate at Harvard University and co-author of the research team, was so surprised to discover the crab, that looks similar to other marine crabs, in amber, which is solidified tree sap.

"In a way, it's like finding a shrimp in amber," said Luque in a press release。

Using micro-CT scans, the team was able to capture tiny appendages like the crab's antennae, legs, the hairs on its mandible, compound eyes and even its gills that had all been perfectly preserved by the amber.

The amber, dated to the dinosaur era, or 100 million years ago, bridges the gap between the two previously-known family splits and is, to this date, the oldest example of a "true crab" venturing onto land and the most complete fossil crab ever discovered, and indicates that crabs became terrestrial or amphibious around that time, much earlier than previously thought. 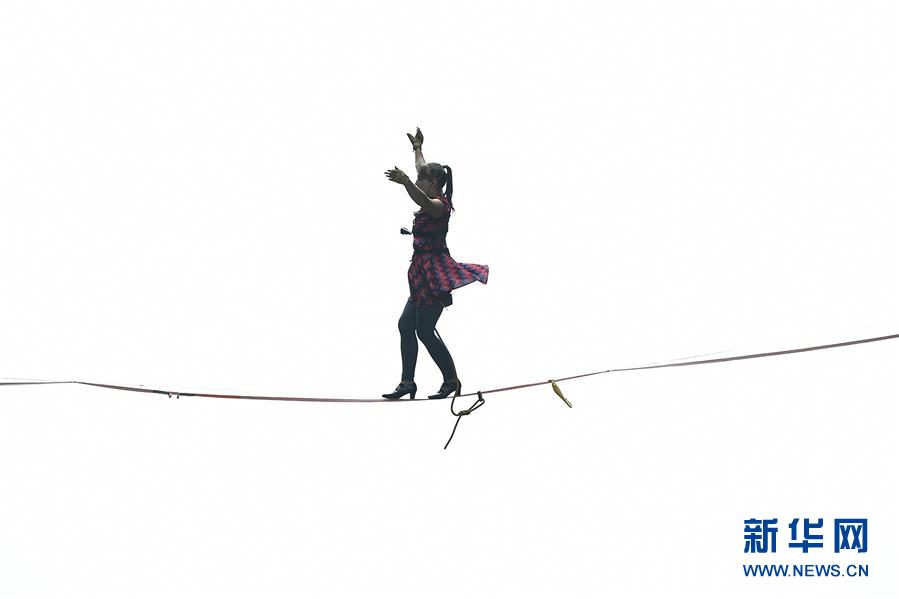